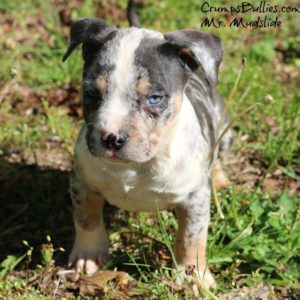 Merle is a coat pattern found in Australian Shepherds and a number of other dog breeds. The phenotype is inherited as an autosomal, incompletely dominant trait. The Merle gene creates mottled patches of color in a solid or piebald coat, blue or odd-colored eyes, and can affect skin pigment as well. Animals that are “double Merle” a common term used for dogs that are homozygous for Merle (MM) are predominantly white and prone to several health issues. Chances of having puppies with health issues is more typical when two Merles are bred together, so it is recommended that a Merle dog only be bred to a non Merle, non cryptic Merle dog. Many solid dogs are actually cryptic or phantom merles and can produce both Merle and double merles.

Merle can affect all coat colors. Recessive red dogs can also be affected by Merle, but the patches are either hardly seen or if the dog is a clear recessive red, are not visible at all. Combinations such as brindle Merle exist, but are not typically accepted in breed standards.

In addition to altering base coat color, Merle also modifies eye color and coloring on the nose and paw pads. The Merle gene modifies the dark pigment in the eyes, occasionally changing dark eyes to blue, or part of the eye to be colored blue. Since Merle causes random modifications, both dark-eyed, blue-eyed, and odd-colored eyes are possible. Color on paw pads and nose may be mottled pink and black.

A mobile genetic unit called a Retrotransposon insertion in premelanosome protein (PMEL17) or silver locus protein homolog (SILV) is responsible for Merle patterning in a number of domestic dog breeds. Merle is actually a heterozygote of an incompletely dominant gene. If two (Mm) dogs are mated, there on average 25% of the puppies will be (MM) homozygous or “double merles”, which is the common term for dogs that are homozygous for Merle. A high percentage of double Merle puppies have vision or hearing deficiencies.

A cryptic or phantom Merle is a dog which phenotypically appears to be a non-merle or very faint patches of Merle that can go unnoticed. Animals that do not present the Merle phenotype may possess the Merle genotype and subsequently produce Merle offspring. These animals are known as cryptic Merles.

Testing Is Relevant for the Following Breeds:

Animal Genetics offers DNA testing for (PMEL17) mutation. The genetic test verifies the presence of the mutation and presents results as one of the following:

An Article provide by Animal Genetics