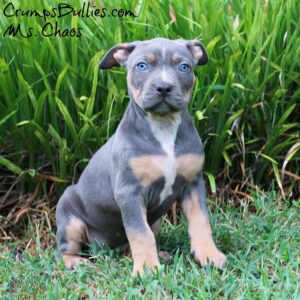 Pitbull dogs is a cross breed of different types of dogs to bring about a dog with excellent characteristics and proper body formation. The gene mutation of these dogs increases adaptability, and they become more tolerant to disease. The Stafford shire terrier is a cross breed of the American bully dog. The American bully breeders are assigned a task to come up with a strain that is acceptable, and that can adapt to live with human beings. The crossbreed dogs have become more popular and with the similar trait to American Pitbull, Staffordshire bully, and American bully.

American bully breeders have been authorized to cross-breed the dogs and sell the bully puppies. They are also the allowed to sell dogs and rescue the orphaned dogs. Most of the American bully dogs are trainable and excel mostly in the sport due to their substantial weight nature. The Bully dog’s aggression based on training and genetic factors and the environment around them. Bully dog puppies are readily available for sale.

A Pitbull Terrier dog was the first crossbreed dog. American bully dogs kept as a pet. The dog is strong, and its determination is overwhelming when in training. Pitbull terrier dogs have a better temperament than many dogs. The American pit bull dogs are plentiful in body size, and some even appear exaggerated XL pitbull dogs. XL pitbull dogs may weigh fourty kilograms and above. Pitbull puppies are also available for sale at the pit bull breeders kennels. The pitbull dogs are smarter and make good guards, and their skin is smooth.

The American pitbull, American Bully and the American Staffordshire terrier share many similarities such as; all are kept as pets and also can participate in different sports once trained. The dogs are also cross breed and are heavyweight and appear in different colors. The dogs are friendly and adapt to the surroundings quite easily. The bully puppies and pit bull puppies are easily confused because they look alike when small. They are available at the local animal shops. Due to the crossbreed nature of the dogs, they become disease resistance and portray a compelling character.